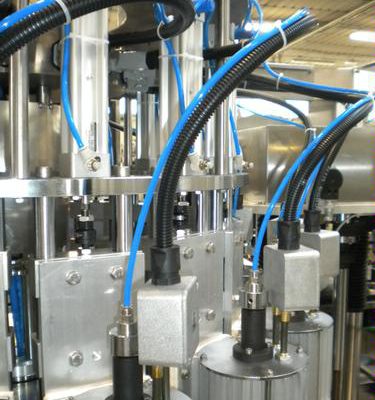 After accurate research and experimentation, Nortan is pleased to introduce the new Thermoflex thermal heads.
In this new and revolutionary system of thermo-retraction, the head’s up and down movements are entrusted to a particular pneumatic cylinder that is long-lasting and resists high temperatures, developed in collaboration with the Airon company in Rovigo.
Currently, all thermo-retraction systems work with a fixed cam meaning how long the head takes to go down depends on the machine’s speed.
During the minimum-speed phase the bottle stays within the head for too long, risking the capsule breaking, while at high speeds the opposite can happen.
Therefore, it is impossible to set up the machine (ventilation pressure within the head and temperature) for optimal smoothing quality when the line’s speed is not constant. In the new cylinder system the thermo-retraction is independent from the machine’s speed and the head’s descent time can be varied by the operator with the touch screen panel.
Thermo-retraction can also happen when the machine is in the manual function (push-button panel) or with a continual production block in that the head will descend just once and in the point indicated by the PLC.
Therefore, the function is simple and, above all, very advantageous from the economic and quality points of view.
This system has ensured us a noteworthy saving in energy consumption as the thermo-retraction temperature is around 200°C compared to the previous 300/400°C and the quantity of air used has been dramatically reduced as we use just one, 2-bar pressure electro-valve.
This new system is already standard in the Prisma 120 and later models, while it is optional in the smaller models.
Various machines with a production rate of 8,000 bottles/hour to 20,000 bottles/hour have been built in Italy, Germany, Spain, France and South Africa with no set-up problems and with results during the hottest period of the year that are well beyond expectations.
Tests carried out by Nortan checking both the worst heat conditions and lack of lubrication in the sliding columns have guaranteed the pistons a life of around 10 million cycles, without replacing the washers.
Broken capsules and bottles having to pass through more than once due to bad thermo-retraction are a thing of the past.
Once again, Nortan has shown itself to be at the avant-garde of technology, with its eyes to the future and the client’s needs.